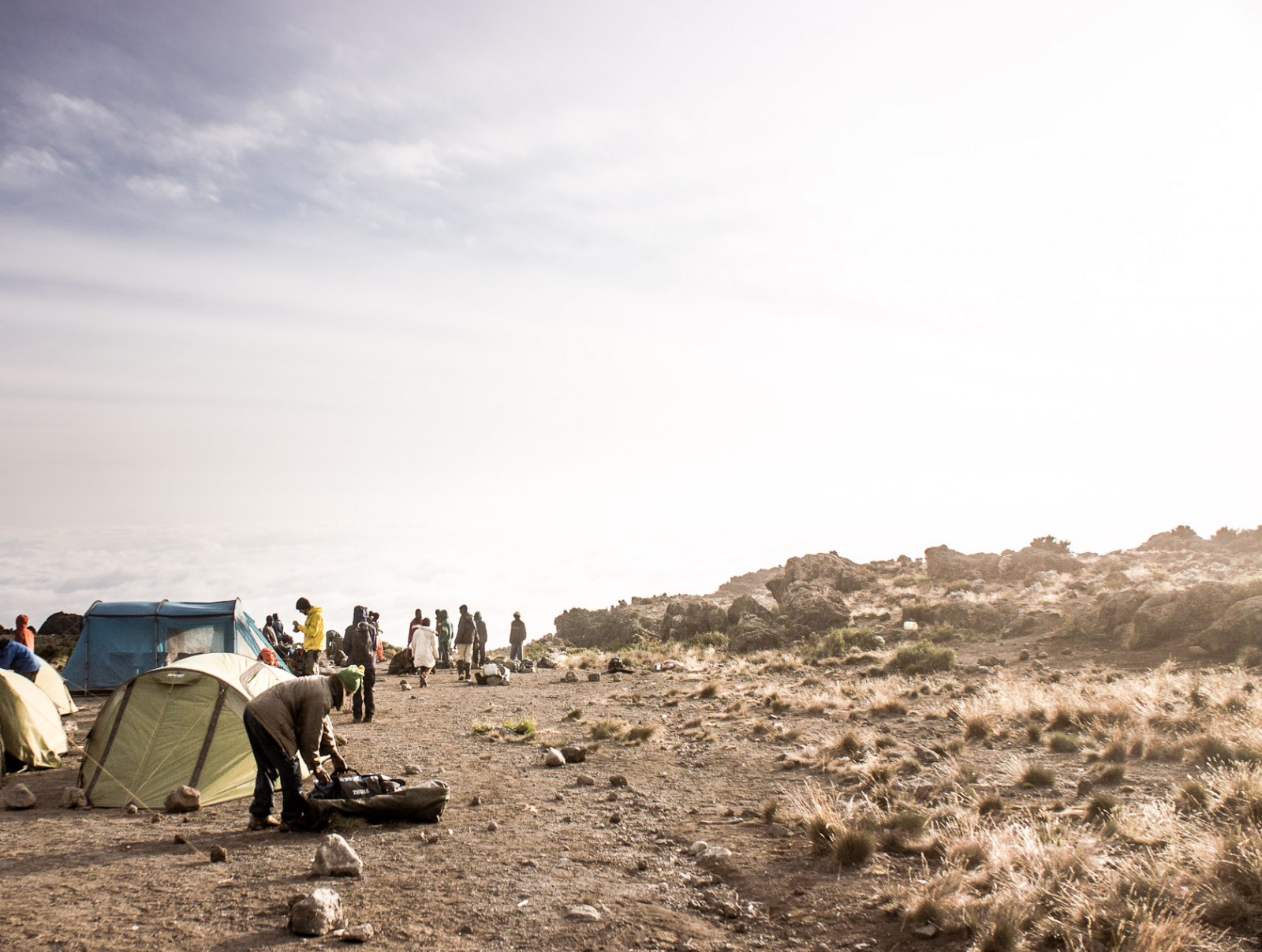 A new day dawns above the clouds. Yet another day of excellent weather and the sun had started to chase away the coldness of the night. Today’s goal was to get to camp 5, the last camp before the top ascent. The trek went over a moon like landscape created long ago by a volcanic eruption. It didn’t take many hours of walking before we reached it, but the walk there was slow. The last camp, School Hut, is situated on around 4800 m and on this altitude you really starting to notice the thinner air. You get out of breathe by just turning around in your sleeping bag. But compared to the previous day, that really had left a mark in the legs, the terrain this day was a bit more forgiving. The path went slightly uphill the whole way until the last couple of hundred meters where it became a bit steeper. It felt so good to finally have arrived at the last camp, and we were all a bit nervous for the upcoming night. We arrived around noon already and we almost immediately went out on a acclimatization walk so we had that done before lunch. The mood was high and everyone felt good for the moment, albeit a bit tired. Down at camp again, with an excellent view of Mawenzi, we had lunch. 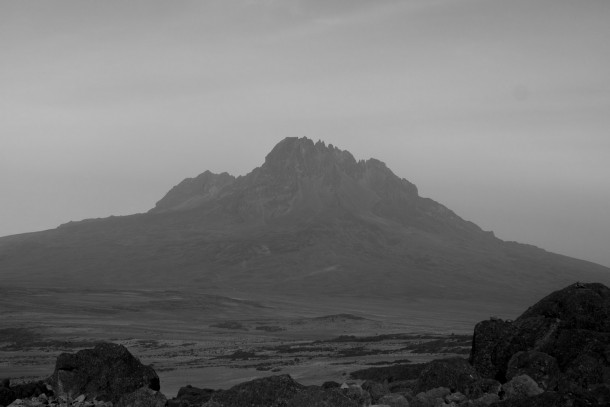 The cone of Mawenzi

Kilimanjaro are made up by 3 separate volcanoes, that began forming about 1 million years ago: Kiba, Mawenzi and Shira. Kiba is the cone that is the highest and that you trek up to reach Kilimanjaro’s summit, Uhuru Peak 5895 m. Also the only one that isn’t extinct, although the last eruption was 360.000 years ago. The Mawenzi cone (that is partly eroded) have the second highest peak, Hans Meyer Peak 5149 m. However, compared to Kibo, Mawenzi has been closed of for climbing for a long time as it is deemed to dangerous to climb it.

With food in our stomachs we went to lay down in our tents a bit to get some rest. Was hard to get any sleep, we played some cards (record for the highest altitude game of Shithead (airplanes excluded, done that as well)?), talked and listened to some music. Dinner was served around 5pm, a bit earlier than usual. Our guide had a walk through of the top ascent, we went through the clothing we were going to use during the night and then it was time to get some sleep. Well, think I got an hour or two at least before the wake up call around 11pm. It was not fun to leave the sleeping bag, it was freezing outside and the eyes didn’t want to stay up. A warm cup of ginger tea warmed the body up a little bit at least. A bit of “breakfast” and a pep talk later we stood outside in the darkness ready to start the walk of hell. About an hour in we joined up with the other two routes taking the eastern ascent up. At this point I was already tired, from here there were still about 6 hours left to the top. One foot in front of the other, again and again and again. Half way in the cold started to creep in to the skin. The toes were cold, the fingers freezing and the body shaking, not just from the cold but also exhaustion. The temperature was only around -10°C, but the body didn’t have any energy left to produce heat, it was shutting down. The mind went numb eventually, I got tunnel vision and only three words kept repeating: “One step more, one step more, one step more”. It is so hard to explain just how exhausted and out of it I was, and it is truly remarkable what the human body can do even though the mind wants to quit. But during this trek one of the most stunning views, and at the same time most discouraging, occurred. At one point we stopped for a rest, one of many breaks, and I looked down the mountain and saw a long string of headlamps weaving down the side like stars. I regret so much for not trying to capture this scene with my camera, but I just didn’t have the strength for it. The problem was, looking up, you saw headlamps glittering along side the stars way up on the mountain. We still had a long way to go.

With continuous encouragement from our guides we finally reached Gilman’s Point at 5681 m, the first real check point. The sun was about to come up from behind the horizon, which meant we were a bit behind the schedule. But we sat down for a bit longer, well needed, break. My head stopped spinning when I sat down on a rock, finally. The air up here contains about 50% less oxygen and the effects were showing on everyone. Sugar was our friend now, fast carbohydrates and a quick fix for the depleted energy reserves in our aching bodies. The spinning started again when we started the final push to the top. Shortly after Gilman’s Point dawn broke, and the first rays from the sun reached us in time for Stella Point at 5739 m which is the final check point before the top. Our bodies finally started to warm up in the sun that now was well over the horizon. It was well needed, it gave at least me the energy I needed for the last couple of 100 meters. The 1.1km between Stella Point and Uhuru Peak can be walked in little over 10 minutes at sea level. It took me almost an hour to cover this distance, I’ve never in my life taken that small steps. 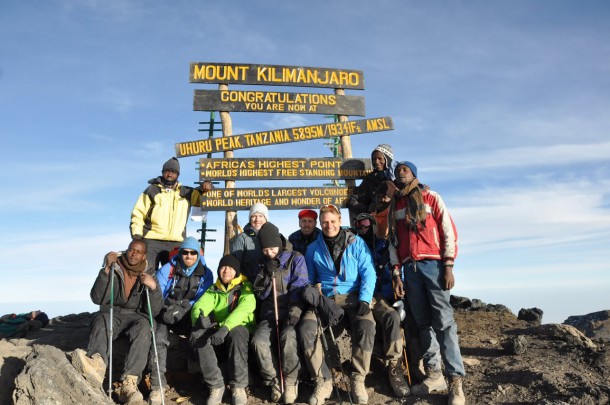 But then I saw it, the sign. Oh the glorious sign that showed where the summit was. I resisted the urge to just fall down on my knees and cry. This was the greatest physical achievement in my life to date. It took a little while longer before everyone in the group had reached the summit, but when we were gathered hugs were given right and left. We posed for the obligatory summit photo before we realized, hell, we still have a loooong way to walk down the mountain. But the euphoria of standing on the roof of Africa and the warming sun pushed away the thoughts a bit longer. With the summit photos taken, the trek down started. First to Stella Point were we had a longer break and a large intake of sugar and carbohydrates in form of Red Bull, candy, crisps and cookies.

The most disturbing sight was spotted when we sat down here where the eastern route and the southern descent route joins, two porters dragging a person up towards the summit. Said person could barely walk himself, and it was not just one person but shortly after another was dragged by as well. Altitude sickness is a serious threat and these people were most likely heavily affected by it. It disgusted my then, just as it does now that the guides and porters didn’t have these people turn around and walk back down when they started to collapse. I hope I never have to experience such guides myself in future expeditions, that try to push me further than I actually can and by doing that puts me in a life threatening situation.

With the energy reserves filled up a little bit at least, I caught a second wind going down the Mweka trail, a steep descent only trail. The further down, the more I could breath! Don’t know if I got high on oxygen or what happened, but I started to feel alright again. The first stretch down from Stella Point was really steep, but fun! The hill down was made up of small and loose gravel and lava rocks. You could more or less ski down with your trekking boots! We covered a large distance in just minutes. But after that, the fun stopped. The altitude differences on the way up from camp 5 to the summit was about 1100 m, the difference we had to walk down the same day was about 2700 m. After Barafu Camp (or if it was Millennium Camp), we entered a stone maze. Not large stones, but big enough that you couldn’t step over them easily. So we had to go in a zigzag pattern that probably doubled the distance we had to walk. It was hot, we still had much of our ascent cloths on, we had run out of water and the trail seemed to go on forever. After a couple hours of walking we reached a temporary camp set up by the porters that carried the gear. A deadly sin occurred here, gluttony. The appetite was back after being down below 4000 m again, and of course because we barely had eaten during the past 20 hours. Being full felt nice and some of us dosed of in the heat a bit. We stayed here for about 3 hours before heading down to the last camp, Mweka Camp at 3100 m. During the walk the air started to transform from very dry to humid. It felt so welcoming for my lungs. The last trek was only a couple of hours long and quite beautiful.

As usual the camp was already set up when we arrived, we put down our rucksacks and kicked off our boots. Now we only had about 3 hours left to walk the next day. We didn’t stay awake long that evening, our bodies were exhausted and we longed for some sleep. A last night in tents. A last morning being woken and offered a cup of tea. A last day of walking. The trail during the last day was through the rainforest. And well, it started to drizzle. Me and another one in the group had reached a mud road when the rain started, the pace we had were almost a running pace. We even passed porters on our way down to Mweka Gate. Which we eventually reached, the final stopping point on our expedition. The others dropped in during the next couple of hours, apparently we were way faster than we had thought. At Mweka Gate we could sit down and reflect on what we had accomplished before heading to Outpost Lodge for a final night before going on a 14 hour long trip down to Dar es Salaam.